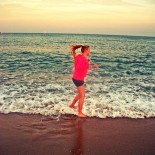 Europe With Empty Pockets; My Philosophy

So, in my last post, I said that I would explain how I am getting about and my whole philosophy about my travels, so here it goes.

If you read back to about my 4th post and on, you will see why I ended up with empty pockets, and the situation I got myself into. When I first got out of the situation and began work at the hostel in Istanbul, I became desperate to get enough money for a ticket back to the states (my home is in Alaska, so it generally costs about $1,500). In Turkey, at the hostel, gathering this kind of money together in one month (which was all I had left on my visa) was impossible, and the more aware I became of this, the more I began to worry.

Thank God my job was at a hostel! If it hadn’t been for the many travelers that came through there, encouraging me, I would have never had the guts to do what I am doing now, that is traveling alone, practically care free. After talking to quite a few people, I realized that I too could be apart of the traveling community, so I began deciding how to go about traveling. I knew it would be trying, it would be difficult, and there would most definitely be snags on the way, but I knew that it would be worth it!

I left Turkey just a couple days short of my visa expiring, and headed towards Bulgaria, then on to Romania. I did a month in Romania at a hostel in Bucharest, then realized this was going to be the beginning of a whole new adventure, unattached from my previous travels, as previously, I was using public transportation.

I left Romania on a train to Belgrade, Serbia (Romania doesn’t have highways, so it would have been a horrible issue getting out) which took all night and into early afternoon.

Its amazing when I think back to the day I arrived in Serbia. I was aware that I would be hitch hiking when I arrived there, but for some reason, my brain hadn’t

quite processed it all. Even as I was on the train, it was as if everything was normal, that I had a known destination, and no real story ahead of me. I don’t think it even really hit me until I was up on the highway, putting my thumb out for the first time. I just got off the train and began walking with no particular direction in mind, it was as if my mind already knew where exactly to go, and that everything would work out, and it did!

When I began hitchhiking in Serbia, I had no money in my pockets. No money for food, or water, I knew that my own government wouldn’t help, but that strangers might, and this is where I began to create a reason for all of this in my mind.

I learned to depend on complete strangers to get me to places I had never been to, often these strangers did not speak any English, I depended on them for food, and a roof over my head at night. You may be thinking that this is wrong, and it would be if I was in a situation that I actually had money. But, here’s where my philosophy comes in: By helping someone in need, whether that person knows it or

not, they are performing a charity of sorts, and if you believe in Karma, that means great things will come out of their helpfulness. In return, when I am in the situation to help others, I do; things always come full circle, whether you believe it or not. 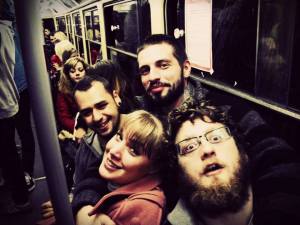 The hostel boys and I after a local wine and duck festival in Bratislava, Slovakia

So, I am traveling Europe, having great/interesting experiences, and I have no money, just my pack, my tent, and my ridiculously heavy computer that is falling to pieces. I am depending on the kindness of strangers, and volunteering at hostels; I am creating life long memories, and making my soul appointments. I know that no matter what happens, good or bad, everything ALWAYS works out in the end, it has to, there is no way around it, the only way things don’t work out is to die, and even then, I will be happy with what life I have been given.

In short, I am ridiculously happy with my life…

2 comments on “Europe With Empty Pockets; My Philosophy”

This entry was posted on September 18, 2013 by akilinaskovil in Uncategorized and tagged Europe, hitchhiking, Life, no money, philosophy, Travel.